Can Glandular Fever Cause Chronic Disease? 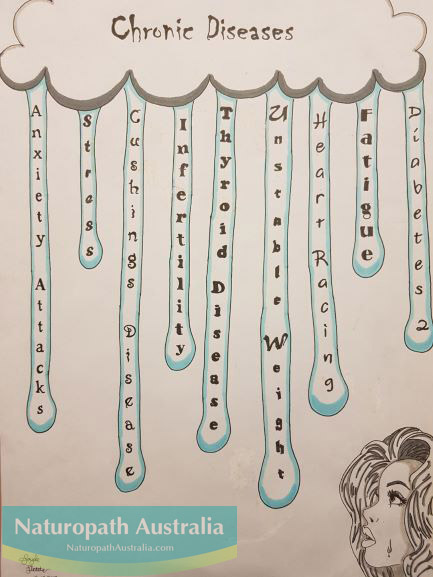 I believe that glandular fever is a major cause of the many autoimmune diseases that our population are facing.

Glandular fever affects the thyroid gland as it is part of the endocrine system. The virus may make the thyroid what is called unstable, where it can test as normal one day, the next day it may test as overactive, next week it may show as being under active.

The thyroid gland is responsible for secreting hormones that influence every chemical reaction in the body. It especially affects your energy, metabolism, reproductive health and digestion. It is a very important gland, and often underestimated.

This reaction of the thyroid gland may leave you feeling:

Unfortunately, this disease is becoming more common in this country, especially among our younger people.

There is a possibility that glandular fever may be responsible for this increase, as it may attack and weaken the pancreas. The pancreas is a large abdominal gland with both exocrine and endocrine functions. It secretes alkaline digestive juices and the hormones insulin and glucagon.

Insulin stimulates the storage of glucose, amino acids and fatty acids. Its principal action is to stimulate cells to take up glucose from the blood. Insulin lowers the blood-glucose level.

Many a young couple wanting a family are puzzled as to why becoming pregnant is not as easy as they would have presumed. Remember, glandular fever may attack every gland and every hormone in their body, leaving them with low sperm counts, or irregular periods.

Often the hormones are completely out of balance, too much oestrogen or not enough progesterone or testosterone.

Both male and Female should be tested for their levels of hormones. A lot of women presume that they are the only partner that needs to be examined. This is a two way street and glandular fever attacks both male and female. It does not distinguish between the two, the ovaries and testes both can be affected by this virus, leading to difficulty in conceiving a child.

Unfortunately, in our clinic we are seeing more and more of these type of problems. Young people and some not so young coming in with racing hearts and breathless, anxious but not quite sure why they are reacting in that manner. There is nothing really wrong in their lives that they can pinpoint as the cause, but the reaction is so severe and so real to them. They are often scared to leave their homes as they are not quite sure when the attacks will happen.

What we have started to realise is that a large percentage of these patients have had one or multiple attacks of glandular fever.

The pancreas weakened can cause the blood sugar to drop too quickly, allowing the patient to feel light headed even dizzy. The insulin imbalance may cause the heart to race, which in turn is frightening, and they think they may be having a heart attack.

Likewise, with the adrenals involved with glandular fever, they may secrete too much cortisol, which can cause a similar reaction.

If you are diagnosed with glandular fever take it seriously. Realise that it may have far-reaching consequences if you ignore the advice that is given.

The best way to treat this virus is to listen to your body, rest if you feel like it, if you think you would like to exercise do so, but do not force your body into doing more than it really wants to.

I have found some people think that they be able to exercise Glandular Fever from their system. This is a mistake and may cause you to have a relapse.

As with any disease you will require simple healthy food, rest, hydration. These are the basics on which to build your health plan.

It is extremely important that Glandular Fever be recognised for it to be treated and the weakened organs balanced. We determine this by doing a hair sample and suggesting natural medicines that will help detoxify and strengthen the Immune system.
To order your Hair Analysis click here