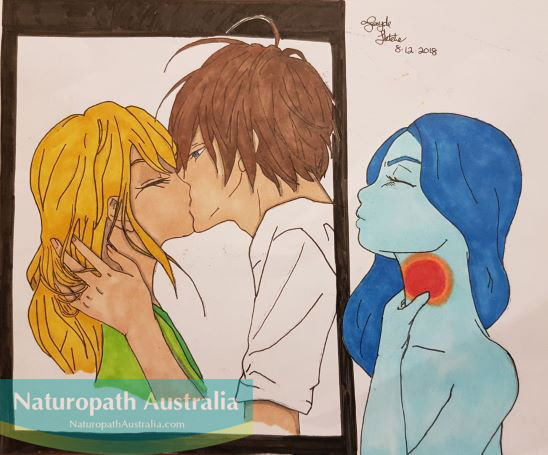 SHOULD YOU KISS SOMEONE WITH GLANDULAR FEVER?

No, that is why it is called the “Kissing Disease”. It is so easily spread by kissing and very close contact.

If they have been diagnosed with Glandular fever, try to make sure you do not use their utensils, cups or glasses. If you live in the same house, do not use the same glass for toothbrushes, keep your towels and face washers separate.

But having said that so many people do not know that they have ever had Glandular Fever , so they are not in a position to warn you not to come too close.

The most common error you can make is thinking that glandular Fever is Tonsillitis , because many of the symptoms can be the same.  Sore throat, high fevers, headaches, swollen around the jaw lines, very hard to swallow.  It is assumed that it is a Bacteria , when in actual fact it is a very contagious virus.

Glandular fever is pandemic in Australia , the Gold Coast Bulletin wrote that 80% of Australians may carry the disease .

When you realise that so many people may have had the disease, you start to know that it is harder not to have had it than to get it.

As you can imagine if you realise that one member of the family has had Glandular fever, then you know that it is likely that other members of the same family may have had it too. Families have this habit of kissing and hugging each other, and if you are home, you may use a towel without thinking as you are comfortable in your own environment.

Glandular fever is known around the world , often under different names e.g Epstein Barr virus , Cytomegelo Virus and in the United States it is called “ Infectious Mononucleosis” .

It is often thought to be a Tropical Disease, but many of the colder countries have acknowledged its existence within their borders.

Glandular Fever, because it involves the Glands, Hormones and lymph Nodes can present with a variety of symptoms that are able to change each time it activates. Sometimes it can present with swollen Lymph Nodes in the groin or the neck and around the jaw. Other times it may be a sore throat and exhaustion.

An attack of this virus can suddenly change a period , it may become irregular , start clotting leading to pain and discomfort . a change in the balance of the Hormones may be responsible

Learn to listen to your body and be aware of any changes that may be happening , the quicker you recognize the differences the quicker they may be treated and the less permanent damage done to your body . Remember this is your vehicle to travel through life.

It is extremely important that Glandular Fever be recognised for it to be treated and the weakened organs balanced. We determine this by doing a hair analysis and suggesting natural medicines that will help detoxify and strengthen the Immune system. To order your Hair Analysis click here