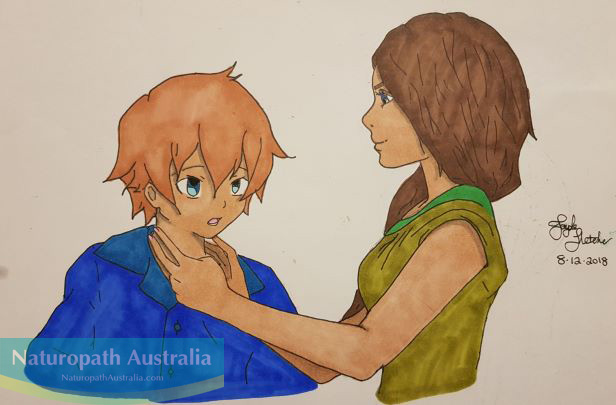 In Queensland, at Naturopath Australia, we have treated many children over the years and I have treated children from infant through to teenagers who have contracted Glandular Fever.

If you, or other close family members have had the disease (often you may not even know that you have had it) it can activate at any time and you may not be aware of the fact that you may be contagious.

You may think that you are just tired or have a sore throat. With such close contact with your children it is very easy to pass on the disease just by kissing or hugging your loved ones.

The most common time I have found for children to contract Glandular Fever is around the early years going into puberty.

For a child to contract Glandular Fever at this time can be very serious as their hormones are naturally starting to change.

Glandular fever will attack their glands, hormones and Lymph Nodes and present them with a variety of symptoms that often are not linked to the Glandular Fever which is otherwise known as Epstein Barr Virus.

Your teenagers can become very moody and difficult to deal with. They often do not want to eat or, indeed if the Thyroid is affected, they may put on weight or lose weight.

Girls may suffer painful, irregular periods sometimes with heavy clotting. Or they may experience severe mood swings in the time leading up to their periods. Some of these children have had to miss schools days because of sharp pains and nausea and heavy uncontrolled bleeding .

I have had girls crying in the clinic because they have bled through their clothes and were bullied and humiliated at school. Many have been prescribed medication such as contraception pills in an effort to regulate their menses.

Boys often do not have such obvious symptoms as the girls. Swinging moods, angry outbursts, sulky silent resentment, sore throats, swollen glands under the jaw or enlarged lymph nodes in the groin are some of the more common symptoms that they present. Muscle aches and joint pains, headaches sometimes nausea are connected to this virus.

It is extremely important that Glandular Fever be recognised for it to be treated and the weakened organs balanced. We determine this by doing a hair sample and suggesting natural medicines that will help detoxify and strengthen the Immune system. To order your Hair Analysis click here